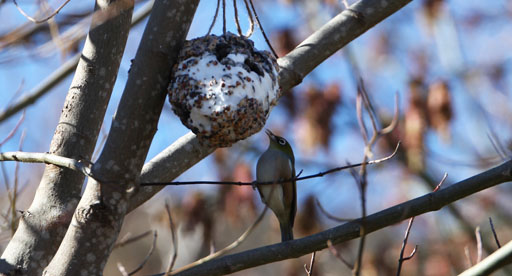 By June there’s not a lot left to eat in the garden – for us or, for that matter, for the birds. I hate to think of all those lovely bellbirds, waxeyes and tuis going hungry, so throughout winter I hang bird feeders around the garden to keep them going.

I’ll often soak and boil a big batch of beans and freeze them, ready to throw into dishes like this. If you don’t have time to soak and cook the beans, use three 400g cans of kidney beans instead. 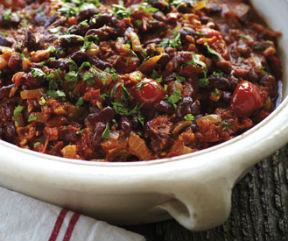 To serve, adjust seasonings to taste then spoon into a deep serving dish and top with coriander.

I’ve been doing it for a couple of years and now the birds stay put at the end of autumn, knowing there will be a regular food supply for them throughout the winter. When it’s bleak and cold and grey outside their birdsong is uplifting.

Last winter we made seed cones for the birds for the first time – it’s such a fun thing to do with kids. You just get a few pinecones, spread peanut butter or softened coconut oil all over them and then roll them in birdseed mix and hang them in the trees. It may take a few days for the birds to discover them, but once they do it’s a feeding frenzy.

If you’re a gardener and you’re looking for ways to attract native birds, the best thing to do is plant trees and shrubs that provide them with both nectar and fruit, especially in the winter and spring when there’s not a lot of other food about. It’s a unique attribute of New Zealand native birds that many are both nectar feeders and seed and berry feeders.

No matter how small your space, any garden can be made more attractive to birds and other wildlife. Winter mulching also helps keep birds happy as it attracts insects for them to feed on.

In terms of native plants, those that best attract native birds are kowhai, kaka beak, New Zealand tree fuchsia, wineberry, karamu, five-finger and flax. If you have room, it’s a good idea to plant a couple of different varieties of each in your garden to extend the flowering season.

Kowhai is a wonderful winter-flowering tree that tuis and other native birds adore. The flowers of the species Sophora microphylla appear in winter before the other kowhai. Nectar-loving birds adore kaka beak (Clianthus puniceus), which produces clusters of red flowers in spring. The tree fuchsia (Fuchsia excorticate) flowers from August to December, and will produce dark purple berries from December to March.

Wineberry (Aristotelia serrate) is a quick-growing tree that has lovely pink flowers in spring, and as long as you have both a male and a female plant your birds will also get to enjoy the red-black berries from January to March. Karamu (Coprosma robusta) is another useful plant for birds. Although its flowers, being wind pollinated, have no nectar, the orange berries sit on the tree from early autumn to late winter.

Five finger (Pseudopanax arboreus) produces clusters of small white flowers in late winter, which are followed by small black fruit in early autumn of the following year. It’s a favourite for many native birds, who enjoy both its flowers and its fruit.

Don't forget exotic plants too. Nectar-loving birds love the flowers of aloes and red-hot pokers (Kniphofia) and I like to grow lots of the Australian grevillea. Its flowers are such a pretty deep pink and the birds just love it!

So, when choosing plants for your garden, remember the birds. They’ll reward you with their priceless birdsong and movement, and also help control insects, pests, slugs and snails.

Although best known as a cookbook author and publisher, Annabel Langbein is also a highly experienced and knowledgeable gardener. She studied horticulture at Lincoln University and for many years has grown her family’s fresh produce in her gardens and orchards in Wanaka and Auckland. Her seasonal harvests are the inspiration for many of the inventive but easy recipes in her books and TV series.