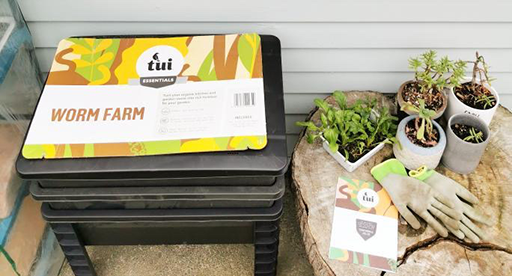 Below are some of the most commonly asked questions we get asked from gardeners using the Tui Worm Farm.

1. Where can I get compost worms?

Composting worms are now available from most DIY and garden stores. Also, your local council may promote worm composting and be able to direct you to a local supplier. We recommend that you purchase a minimum of 1000 compost worms.

2. How much will my worms eat?

This depends on how many worms you have. Worms can eat up to half their own bodyweight every day and can double their population every few months. If you start your Tui Worm Farm with 1 pound/450 grams of mature worms (identify mature worms by a distinct ring shaped swelling around their body) they will consume up to half a pound /225 grams of food waste per day. After a few months you should have doubled your worm population and you can feed them more. The baby worms, however, won’t eat much and will take about 3 months to mature. As you become familiar with them you will learn their rate of food consumption. If you are feeding too much, the excess food will go anaerobic and begin to smell. If the top working tray becomes smelly, stop feeding for a few days or even a week, sprinkle with a teaspoon full of Worm Farm and Compost Conditioner, and mix it in with a small fork or spike.

3. How can I help the worms to eat more?

Worms will feed at a faster rate once they have adapted to any new food source. Worms will also eat more if food scraps are mashed, blended or cut up more. Controlling the temperature to around 24°C will improve the overall performance of your Tui Worm Farm. Worms will leave very acidic food such as onions and orange peels until after they have eaten their preferred foods. A handful of crushed oyster shells or ashes from a fire will help to balance the effect of acidic foods or sprinkle with a teaspoon of Tui Worm Farm & Compost Conditioner once a week. The regular addition of Worm Fattener will encourage stronger, fatter worms. Since they consume up to half their own body weight each day, the fatter the worms the more food scraps they will eat.

4. What shouldn’t I feed my worms?

Be careful what you feed your worms particularly if you are unaware of its source. Manure from horses, cattle or dogs often carry vermicides intended to kill parasitic worms in the animal. These vermicides can kill all your worms in one day.

5. Can I feed my worms garden refuse?

Not usually. The Tui Worm Farm is designed to break down soft organic food scraps. Slow composting organic wastes such as garden refuse are best dealt with by conventional
aerobic composting methods.

6. I’ve had my Tui Worm Farm for a month now, but the worms don’t seem to be eating any of my food scraps?

7. Should I add water to the Tui Worm Farm?

Watering of your Tui Worm Farm will enhance the production of liquid fertiliser. Food wastes usually contain about 80% water. This is released as the worms break the food down. This will tend to stay in the bedding for a long time before eventually draining out. Any dry material such as newspaper or cardboard should be pre-soaked before being added. It is important to keep a Worm Blanket over the freshly added food to encourage the worms to move up to the surface to feed. This will provide a dark damp shelter for them.

Once every week, pour about 5 litres of fresh water into the top working tray, which will flood down through the lower trays and ensure that the entire worm farm is very moist. Worms love an environment with a moisture content of 70% or more, as long as the excess water can drain off and does not become ‘stale’ (i.e. anaerobic). This practice is especially important in the hotter months of the year. Place an empty bucket under the open tap, you will have a constant supply of liquid fertiliser. The sudden ‘flood’ will not harm the worms.

No, you will never have too many worms. They will regulate their population to the confines of available space and the amount of food you give them. Your worm population should reach about 5,000 to 10,000 worms after about one year. Some Tui Worm Farms have been known to house up to 20,000 worms under ideal conditions and diligent management.

9. Can I put compost worms in the garden?

Yes as long as you have a thick surface layer of mulch on your garden. Compost worms require moist conditions all year round because they don’t tend to tunnel deep like Earthworker worms to find moisture.

10. Why aren’t the worms moving up from the lower levels into the top working tray?

This situation can arise for two reasons. First, you may be adding new food too soon before the worms can eat the previous food. This will result in a lot of uneaten food scraps being distributed throughout the system and a general reluctance by the worms to migrate upwards while they can still access material lower in the system. Before adding new trays, stop feeding the worms for at least a week to ensure that all existing food in the lower tray has been eaten. Worms will then move up to eat from the surface as this is their natural behaviour pattern.

Secondly, you may not have waited for the level of worm castings in your working tray to get full enough in the tray before adding the next tray. This will create a gap between the trays preventing the worms from reaching the top tray. If there is a gap between any two working trays, simply lift off the top tray and add some organic soil or organic potting mix to the tray beneath, put the top tray back on and continue operation.

11. What about severe temperatures?

Worms will tolerate a wide temperature range from about 10°- 30°C. If it gets much hotter than this, make sure your Tui Worm Farm is in a shady cool position. Take the lid off and hose the whole unit down keeping the bottom drainage tap open to release the excess water.

If it gets much colder and freezes, put your Tui Worm Farm in the warmest possible position. An example being your basement, laundry or shed. If it is on a balcony or out in the garden, cover the unit with a couple of old carpet pads or old blankets to keep some warmth in.

12. It’s raining and the worms seem to be gathering in the lid. What do I do?

What you are noticing is the worms sensitivity to air pressure changes in the weather. They will often go up into the lid even before it rains. In nature this takes them out of the soil to stop them flooding and drowning.

13. Are the little white worms in my Tui Worm Farm baby earthworms?

No, baby earthworms are not white, but clear to opaque, before developing a reddish colour. They are just visible at this stage. The ‘white worm’ you are noticing is a type of worm called entrachyadids. They will not hurt compost worms, but they do indicate acidic conditions, which can be overcome by the weekly addition of a teaspoon full of Tui Worm Farm & Compost Conditioner. By placing a piece of moist bread in the top working tray of your Tui Worm Farm you can lure the white worms to a small area for easy removal. It is important to note that many organisms may appear in your Tui Worm Farm (such as large populations of minute red mites and large soldier fly larvae). These are beneficial to the breakdown of organic material, so there is no need to remove them.

Ants will enter your Tui Worm Farm if you have a lot of them in your backyard and particularly if you have let the bedding become too dry or acidic. If you do get ants in your worm farm simply add water to raise the moisture level, add a liberal quantity Worm Farm and Compost Conditioner to where the ants are gathering and dig and disturb the area where the ants are. This should discourage them. If they persist remove them physically and smear some Vaseline around the legs or place each leg in a container of water to isolate the system. Never use insecticides near a worm farm.

If managed correctly your worm farm will not attract flies. The Tui Worm Farm is fly-proof against household flies. Sometimes the very small Vinegar Fly (often mistaken for the fruit fly) gets in, but these do no harm. However, very large numbers of the vinega fly may indicate that you are feeding your Tui Worm Farm too much and may be a prelude to problems such as offensive odours. To eradicate Vinegar Flies, slow your rate of feeding to what the worms will eat on a daily basis and ensure that freshly added wastes are sprinkled with soil, and then covered by a moist Tui Worm Blanket.

Should you experience any influx of maggots, it will most likely be the Soldier Fly larvae. The Soldier Fly larvae grow up to about one inch/2cm long. They start out white but soon turn dark grey with distinct ribbing bands. Fishermen say they make great bait. Don’t be too alarmed if they appear. They are actually beneficial to the waste breakdown. If you want to remove them though, do so by liberally applying Tui Worm Farm & Compost Conditioner, or placing bread soaked in milk on the surface of the compost. Larvae love bread and should infest it. Remove the bread (and maggots) after 2-3 days and bury them in a hole in the soil somewhere.

The only smell associated with a well maintained Tui Worm Farm is a pleasant rainforest odour. If your worm farm has an offensive smell, it is an indication that anaerobic bacteria have built up in the system in uneaten food scraps. Stop feeding the worms and stir the food scraps in the top tray lightly with a garden fork adding Tui Worm Farm & Compost Conditioner as well. This aerates the organic material and allows worms to move through it more easily. Repeat this aeration procedure regularly to prevent recurrence. Start feeding again when all smells are gone.

Leaving an established Tui Worm Farm for 3-4 weeks without constantly adding food is not a problem. Just feed the worms some extra food before you leave. A good ‘slow release’ food for holiday worms is Lucerne/alfalfa chaff, or pea straw. Just add a 50mm layer of wet chaff or pea straw. Flush the worm farm with at least 5 litres of water. Make sure that you leave the unit in a cool place under cover and leave the tap open with a container under it. Putting a soaked newspaper on top of your Worm Blanket will give added protection against their bedding drying out.