The last of autumn at Cannons Creek

The students at Cannons Creek School in Wellington share their final garden diary for autumn, including the garden tasks they have been enjoying and meals they have been creating with their very own harvests through the Garden to Table programme.

Rain had been forecast but after a stormy wet night we were very relieved and pleased that the morning was mild and dry! This was great gardening weather as the thirsty ground was well watered and loose for us to dig. First and foremost Cannons Creek School and the Garden to Table team extend a sincere ‘thank you’ to the kind people from Tui Products who have donated a number of essential garden products for our use. We had run out of seed raising mix, potting mix and blood and bone so their generosity has been a big boost to our programme. The extras of compost and vege mix were so useful as our compost is still aging and in the process of breaking down.You can see the year 4’s, the donated goods and some of the garden team in the above photo.

Today it was also wonderful to have the help of two Dad’s in the garden, Steve and James. Steve was a first time volunteer (Dad of Erassmuss) and James (Ace and Rhodelia’s Dad) has been with us on several occassions. What a lot of work they did and all with plenty of energy. We hope they can both come again as the students love it when their families are able to help in the garden!

Thank you too to Helen L, Joy, Kirsty and Annabel our regular gardeners who are a great asset to our school. We couldn’t do the gardening without your support. Last week when we experienced the shocking weather bomb with severe rain some of these dedicated team set sail (almost literally!) into terrible conditions all with the intent of supporting the children. Our wonderful kitchen team today included Melissa, Gill, Sher, Michele, Gayle, Jan.

Helen and Nikki took Erassmuss, Ed, Teniko and Lei to gather pine needles from the park next to the school. Afterwards they tackled the compost pile. Helen is an expert by now and organised her crew to mix in the usual coffee grounds, seaweed (very stinky!), pine needles, veges past their best, grass and lastly fruit scraps collected from the classrooms. It was a big job turning over the compost and the crew worked faithfully under Helen’s direction. You can spot Teniko, Helen and Erassmuss in the picture below. 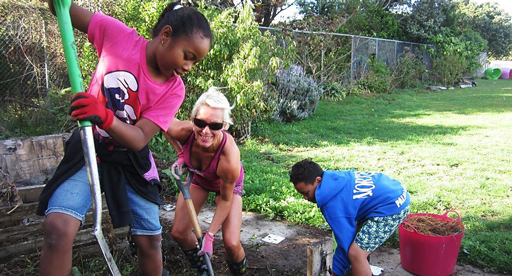 Steve was sent with his team of Sovereign, Ryan and Roger to plant onion seedlings. These are called ‘Pukekohe Long Keeper’ and were the second batch planted (more had been planted in another area before the holidays). The onion bed had been limed a few weeks ago so the addition of Tui Vegetable Mix to the onion bed will provide an extra boost to our seedlings. Onions are not planted deeply with the soil just covering roots and plant base. The team watered everything in adding some worm tea as an extra booster. They were finished in plenty of time so were then tasked with feeding worm tea to all of our brassicas and leafy greens: - broccoli, cabbages, cauliflower, spinach, bok choy, silver beet and broad beans. Steve also attempted to fix the wind cloth that keeps getting blown down! Tomorrow he has offered to come and help tidy up the messy shed which I never seem to have time to do. Thanks Steve!

Annabel and James worked with Rhodelia and Elaine to feed the citrus with Tui Blood & Bone. We love this product in the garden and so do our citrus trees! The team tidied around all of the fruit trees making the surrounding area weed free. Some rotting seaweed was also placed around our newest feijoa as a mulch.

They also trimmed back some Paris daisies which we had planted as wind protection around selected fruit trees. These daisies are very hardy and have been a great source of colour in the garden especially in the colder winter months. All of the plants are descended from one piece brought from my garden some time ago. They seed everywhere! A large bunch was taken to the kitchen and made a pretty display on our meal tables. 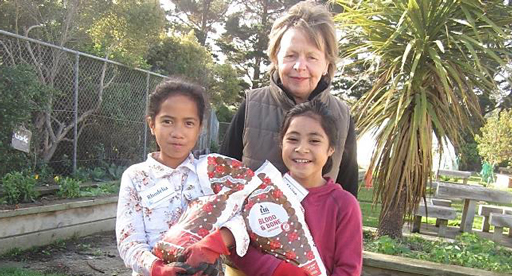 Joy, Deyva and Misha were a busy team - digging out the last of the cherry tomatoes and planting more leafy greens (perpetual spinach) in garden two - a bargain find at 50 cents for a six cell punnet! Their next exciting job was to hunt for our potatoes. They had trouble finding them at first because they have been so deeply covered but managed to dig up some choice ones. There must be many still in the ground but they will check next week. The potatoes are great for making the soil nice and crumbly. We had two different varieties planted last year - Cliffs Kidney and Agria. They were added to the curry and were very tasty. You can see Deyva and Misha with some of the harvest. They also picked some squash (butternut and pumpkin) to add to the curry. The butternut is seed taken from a store bought variety. 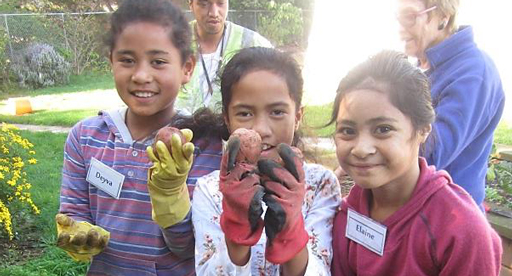 Volunteer Kirsty went with Misha and Ariah to tackle the herb garden. A lot of the apple mint has taken over so it was dug out and cleared by this team. The roots were all matted together so it was hard work digging it up. They were tired after their efforts. We will work more on this space as it’s in a sunny spot which is good over the cooler months for adding extra veges (some of our beds lose a lot of sun over winter and aren’t as usable). They also transplanted regular mint to another spot as we do use it a lot in our recipes.

Kirsty sowed some cress under our peach tree as well. Ms Leuluai also planted some red tulip bulbs here which I had purchased earlier. They are a tall growing Dutch variety called ‘Apeldoorn’. They will look beautiful with their bright red blooms come spring. We also have anemones to be planted in this spot. They needed soaking for several hours first.

After our delicious meal we transplanted more pea seedlings in our pea patch. These were started in paper cups and have grown well. We seem to have peas throughout the garden because of the pea straw we have used everywhere as a mulch! We sowed more onions in seed trays as we always need plenty. The leeks sown back in have germinated and are growing slowly.

It’s wonderful to think that the end result of hard work and enthusiasm from our garden teams culminates in a delicious meal. Today was no exception as we enjoyed a delicious curry with rice and coleslaw for our meal. It was certainly a bumper harvest for us today and some of our crop included: potatoes, cucumber, tomatoes, a variety herbs (mint, parsley, thyme) pak choy, silver beet, cabbage, broccoli, spinach and pumpkin! Melissa and the ‘front of house team’ introduce the menu, say a karakia and thank our wonderful helpers and sponsors.

We are excited to be supporting Garden To Table as our school programme this year. Garden to Table is a trust, which runs a gardening and cooking programme in schools across New Zealand. As participants in the Garden to Table programme, seven to 10 year-old children spend time in a productive vege garden and home-style kitchen each week. There they learn skills that will last them a lifetime, and discover just how much fun it is to grow and cook their own seasonal vegetables and fruits.

Tui is providing starter packs to each of the new schools, and seasonal packs during the year.

The last of autumn at Cannons Creek Comments