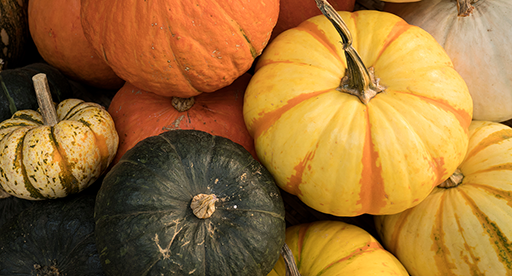 Follow our full guide below for a bumper crop of homegrown pumpkins.

Tasty, sweet and versatile, pumpkins (or otherwise known as squash) are a crop the whole family can enjoy growing. Pumpkins are happy trailing along the ground. Pumpkin vines can also be trained up a strong fence, tree or trellis to save on space. Pumpkins are easy to grow and will provide even gardening novices with hassle-free success.

If left to their own devices pumpkins will happily scramble almost anywhere, and sometime even sprout up by themselves in the compost heap. Choose a sunny position to plant your pumpkins. If space is an issue, you can grow pumpkins in containers. Choose a smaller-grown variety and a large container and place it in a sunny position.

Pumpkins need a long growing season of approximately four to six months depending on where you live. Plant out as soon as frosts are over and keep well-watered while the plant is establishing itself.

If growing from seed, germinate seeds in late winter or early spring in sheltered areas, or after the frosts have finished in cold areas. Allow 2 metres between each plant.

Refer to our Planting Calendar for when to plant pumpkins and squash in your region.

The better the soil, the better your plants will grow. Pumpkins enjoy a rich fertile soil. If you are starting with an existing garden bed dig in organic matter like Tui Sheep Pellets and Tui Compost to your soil. Then you can add a layer of Tui Vegetable Mix.

The best times to plant are early in the morning or late in the day, so the plants aren’t exposed to the hot sun straight away. Always water plants well before and after planting.

Pinch out the main stems once growth starts; this will encourage more lateral stems and give you a heavier crop of fruit. To encourage large pumpkins, allow only two to three to develop on each plant.

Feed your plants and they will feed you. Pumpkins use nutrients from the soil as they grow, so replenishing the nutrients ensures your plants grow to their full potential. Select a fertiliser specially blended for your crop like Tui Vegetable Food.

Well watered, well nourished pumpkins will have a better chance of keeping insect pests and diseases at bay. Avoid getting the foliage wet when watering. Lift off the ground in some areas if the ground is cold and wet. Mildew can be an issue - control with a suitable fungicide if it becomes an issue.

While your pumpkins are growing regularly apply a dose of Tui Organic Seaweed Plant Tonic to give them a welcome boost.

Remove excess leaves to aid ripening, but don't be tempted to remove too many as this will reduce the amount of photosynthesis.

A general rule is to harvest pumpkins after the first frost. If you live in a mild climate, pick them once they have coloured up and sound hollow when you knock the shell. If the skin of the pumpkin is hard and doesn't leave a dent when knocked, it is ripe. Another indication they are ripe is when the leaves die away.

Cut pumpkins from the vine with a sharp knife, leaving the stem on the fruit. Place in a dark, dry place to store.

Be vigilant and stop unwanted insects and diseases from ruining your plants. Slugs and snails can be an issue - lay Tui Quash slug and snail control around young plants.

When should I plant in
Tina's Pumpkin Soup